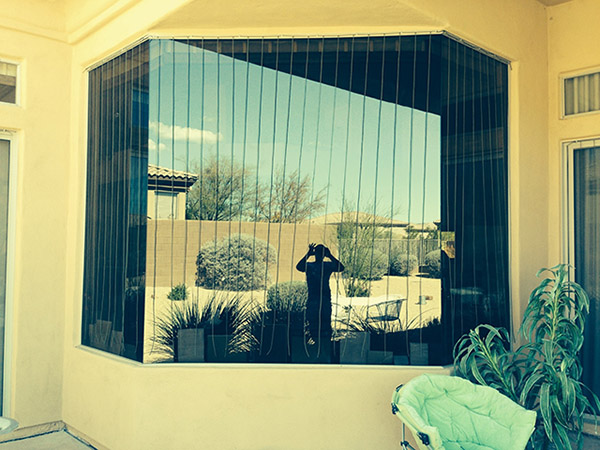 This is the most wonderful product! We have had no bird strikes at all since putting it on our picture window, and before had 10 or so strikes a month. Great because it can be easily removed/reinstalled for cleaning, and because it looks much nicer than stickers. Thank you for an excellent product that makes us enjoy our picture window again!

Everyone here loves the installed BirdSavers!

BirdSavers are absolutely fabulous…I love the product. Took our Maintenance guys 1 hour to install, and that was primarily because they had to work around vegetation. Most folks said they didn’t even notice it…which is good.

Our dove strikes have dropped to nearly zero. We were getting at least one per day before putting the BirdSavers up and the impact of having them has been dramatic. You have an excellent product and I hope you have continued success with it and you can quote me!

I am a wildlife biologist with the Craighead Institute in Bozeman, Montana. Several weeks ago I installed a slightly modified DIY version of the Acopian BirdSavers on some windows on our house that were averaging at least one bird death per week with strikes occurring every day. Since installing the bird savers, we have witnessed zero strikes on treated windows and no dead birds beneath.

What drew me to the Acopian BirdSavers was the fact that you have peer-reviewed scientific experiments to verify that they work. In addition, the aesthetics are far superior to other methods for avoiding bird strikes on windows. I’m am recommending your method to anyone needing to protect birds from striking windows.

Just wanted to let you know how pleased I am with the two BirdSavers I ordered back in April. Since they have been up, not one bird strike on the windows! The velcro has held up just fine in the Arizona heat, though the velcro tabs are not actually in direct sun, so that helps. My intention is to have them up during migration and early nesting season, and now that has passed, I’ll take them down. The velcro stays on the window frame so they can go back up easily next year.

Thanks so much! I really love them.

After three years of increasing problems with orioles, cardinals and robins hitting our windows, I came across the Acopian site. I followed the directions and made wind curtains for seven of our windows…. easy to make and attach. What a difference they have made. Since they have been up, we have had no deaths of birds flying into our windows. The BirdSavers do not interrupt our views. Cleaning windows is easy, and does not require removal. We have had the Zen Wind Curtains in place now for several years, and have shared the BirdSavers website with other interested friends. They are a great solution...and such an easy solution, if only people knew about them. Thank you for giving us a successful, inexpensive and attractive answer!

I just wanted to give feedback on how great the birdsavers are working here in Alaska. It’s been a long, cold spring and we had many birds at our feeder this year. They were literally hitting the window every 2 minutes. My dog was unable to sit in the room. I put them up and IMMEDIATELY they stopped hitting it. We’ve had no more incidents of stunned birds for the last 2 months. Before that we had one a day.

Now that the snow is gone, the birdsavers are much less visible. In fact they blend in quite nicely with the trees. We really hated to apply anything directly to the glass, so we are extremely pleased with how they look and their effectiveness.

The BirdSavers seem to be doing the job well. Bird strikes in our facility on the windows where the BirdSavers are installed are down to about zero. The end of one BirdSavers fell down this summer, leaving about 2 feet of a window unprotected for a few days and we had a bird strike on that part of the window (that’s when we realized that it had partially fallen).

They cords aren’t very noticeable, from either the inside or the outside, and everyone who has commented on them has commented favorably. They seem to be staying fairly clean and, because they swing, free of spider webs.

We’ve had several good wind storms and just once in a rare while a couple of cords will get a bit tangled. People walking past them will just run their hand down the cords and easily get them hanging normally.

We just recently ordered some parachute cord and will start making more BirdSavers ourselves to cover the rest of the windows in the courtyard (which is where we still have a problem with bird strikes). Hopefully that will all go well — we have a few large, tall windows. But we have some nice small windows to start with.

Thanks for checking in with us.

We live in a wooded area adjacent to State Game Land in Eastern Pennsylvania near the Appalachian Trail. Our bird feeders are usually filled three seasons of four which attract many songbirds. Unfortunately, a few hawks have found those passerines easy prey. Other birds have hit windows with no obvious predator in pursuit. Our daughter read some of Dr. Klem’s research and suggested Acopian BirdSavers on all the house windows. They really do work to deter bird collisions. This has been especially evident during the 2011 spring warbler migration when not one warbler has been killed as has happened in the past. What a relief!