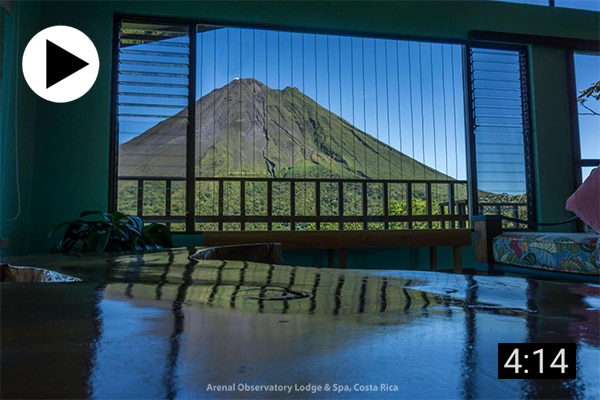 "In the United States alone, it is estimated that up to a billion birds die each year in collisions with windows, walls, and other structures. In fact, window collisions are the second largest anthropocentric mortality threat to birds, second only to domestic cat predation. Although this window collision problem is serious, and human-caused, solving it is complicated, involving cooperation from businesses and members of the public alike. Conscious of this problem facing our resident and transient bird populations in Costa Rica, in March 2017, the Arenal Observatory Lodge & Spa began the process of fabricating and installing Acopian BirdSavers on their high-risk windows. Acopian BirdSavers work by creating breaks in the reflection of a window, making birds more likely to avoid flying into to them. In the following months, the Arenal Observatory Lodge & Spa has noticed a significant decrease in the number of window collisions in areas with the BirdSavers installed. Although collisions still do happen, when the BirdSavers are installed they are nearly never fatal. The thought is that although birds may occasionally hit a window with the BirdSavers installed, they may have noticed them at the last moment, giving them a split-second to react and better brace themselves for impact."

"The Arenal Observatory Lodge would like to invite our friends and guests to help us participate in this quest to better protect our birds from human-caused mortality." 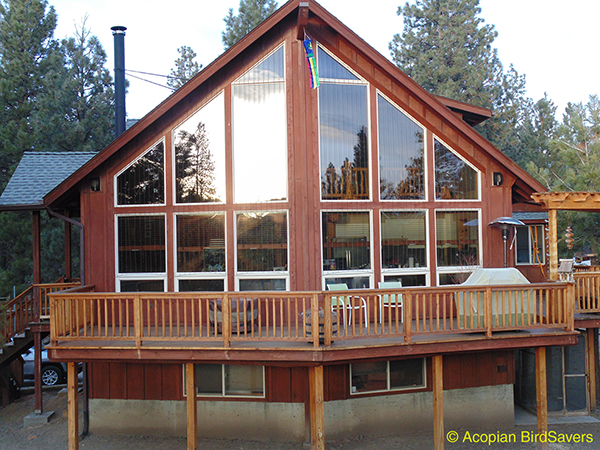 “Attached (above) is a picture of my house with your BirdSavers installed. I have to say, I have not had a single bird strike since I put them up. Before that we had weekly strikes here. It is SUCH an amazing product, and I am so thankful for it. Lives are being saved daily.”

Thank you SO much!
Amy Vukovic
Bend, OR 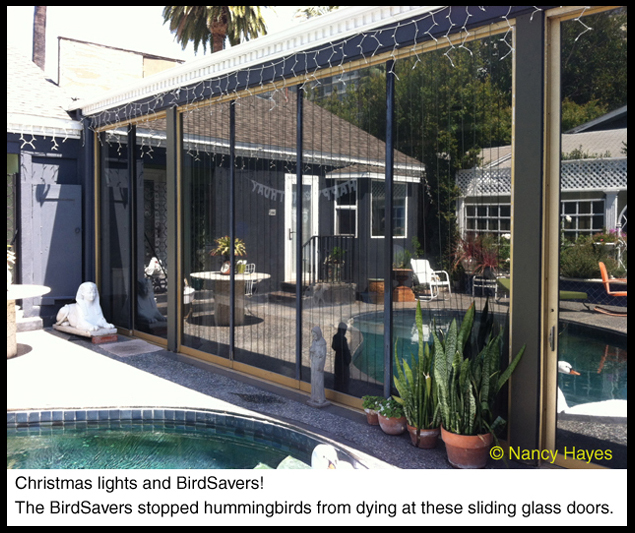 “Yes, the hummingbird demise has stopped!! They no longer hit the windows and have to be retrieved from the pool after being stunned….or worse, if they break their necks. We have very large sliding glass doors on a majority of the back of the house. We only put the BirdSavers on about half of the windows and it is still effective. At first, we were skeptical that the strings being so far apart would be effective; but they started working immediately upon installation. I would definitely recommend them highly to anyone that might be having a similar problem. It is always sad to see those small little birds lose their lives. Thanks for your help and brilliant idea!” 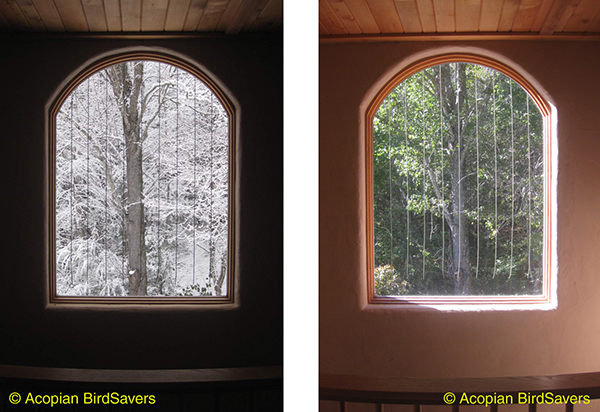 “We have not had one bird strike on a window with BirdSavers! We have 15 windows (including the arched window above) with “official” Acopian BirdSavers that you made and 2 windows with DIY versions that I made. Without BirdSavers, we used to have several bird strikes per year, often resulting in immediate death.

Thank you! I don’t live in fear of hearing that most horrible “thump” sound any more.” 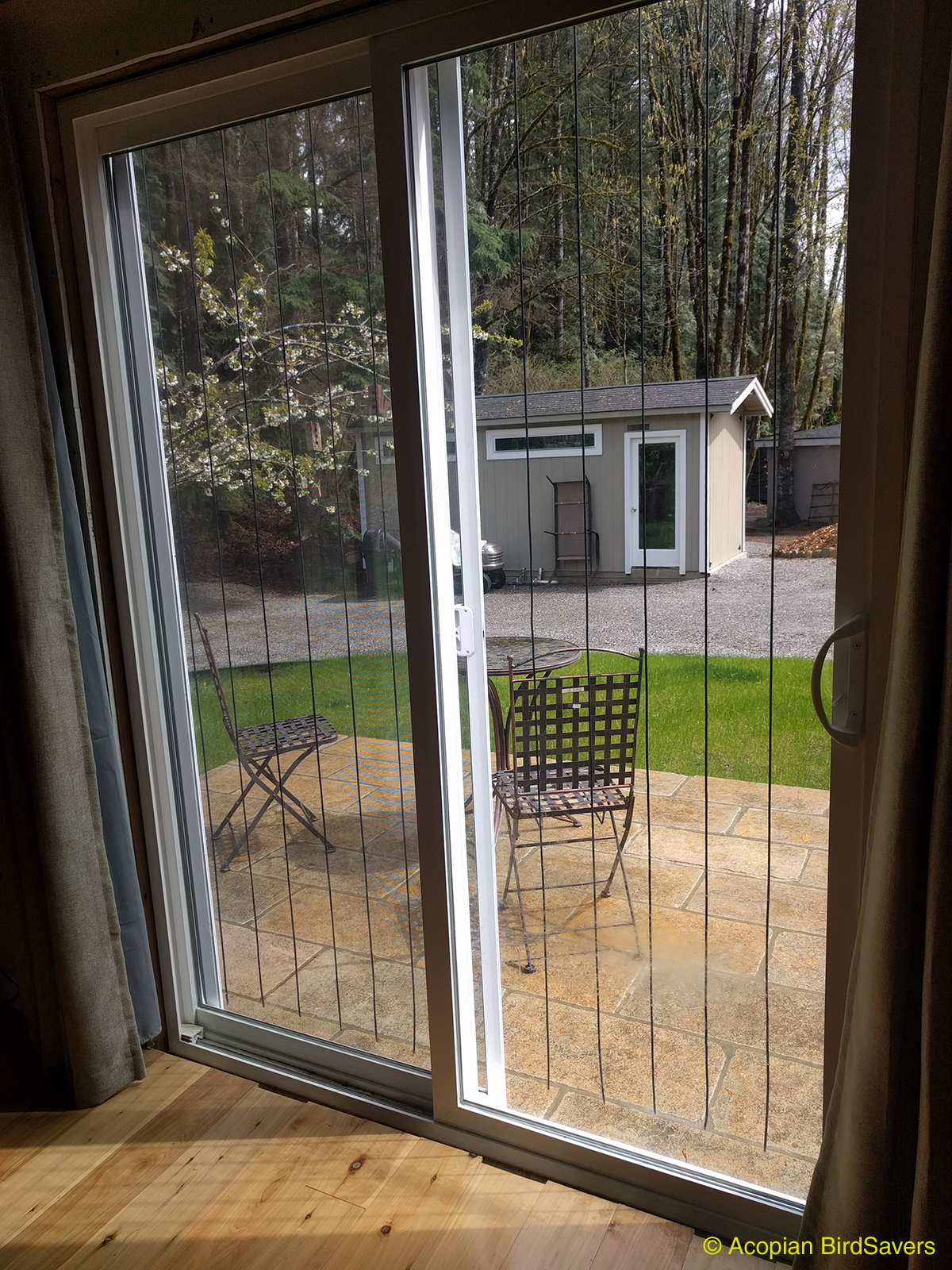 “These things really work, my husband and I just watched three bird collisions avoided in the course of one morning, it is such a relief. One got so close that its wing flipped one of the cords and left it swinging, but veered away before hitting the window, exactly as described in the section on your site that explains how the BirdSavers work. I found your site after a desperate internet search after having watched a beautiful Varied Thrush, one of my favorite birds, fatally blast itself against our window inches away from one of the bird deterrent window stickers that I had just ordered $50 more of because I thought they worked. My husband did the do-it-yourself version BirdSaver (see photo above) and we haven’t had any strikes that I know of since. Also the cords have remained untangled even during windy conditions, to my surprise. Thanks for a great product and for offering a DIY option.” 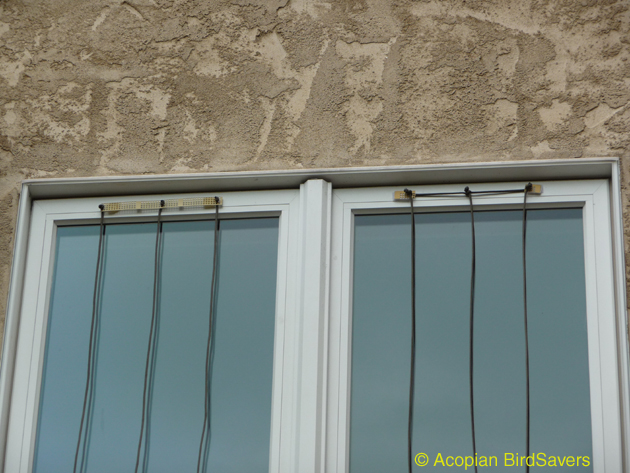 In the above photo there are two DIY versions of Acopian BirdSavers. On the left, there are 3 vertical hanging cords hanging from an aluminum support strip. On the right, there are 3 vertical hanging cords hanging from a ‘support cord’ made of parachute cord that is suspended from small aluminum tabs. The horizontal support structures are attached to the house with small pieces of velcro. 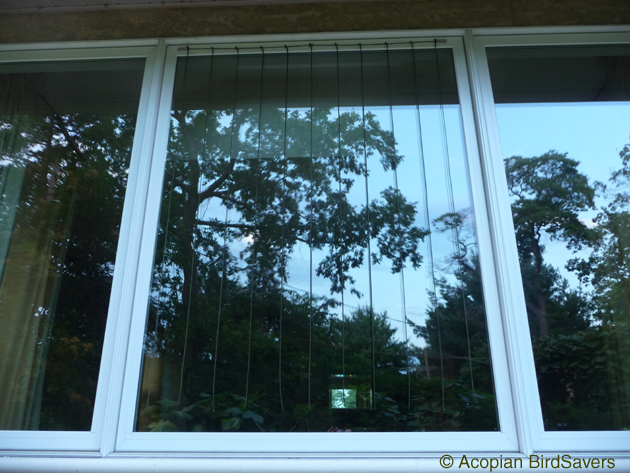 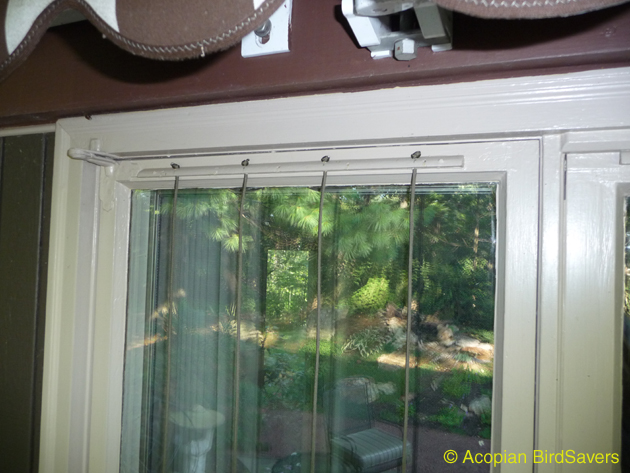 In the DIY Acopian BirdSavers version above, the vertical ‘hanging cords’ are suspended from a piece of moulding that has holes drilled in it for the ‘hanging cords’ to hang from. The holes are spaced 4.25” apart. 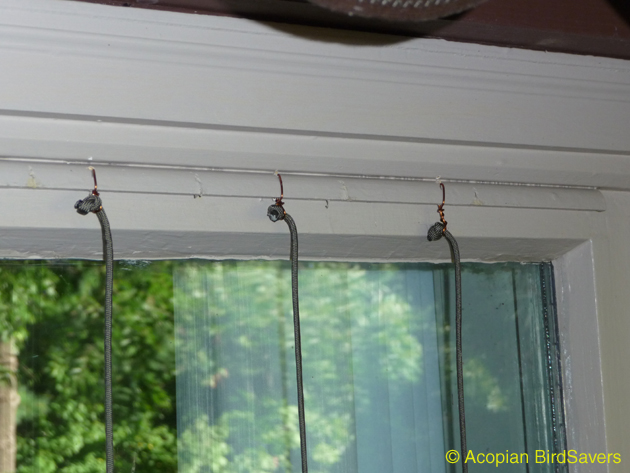 In the DIY Acopian BirdSavers version above, the vertical ‘hanging cords’ are suspended from wire loops that are attached to a piece of moulding every 4.25”. 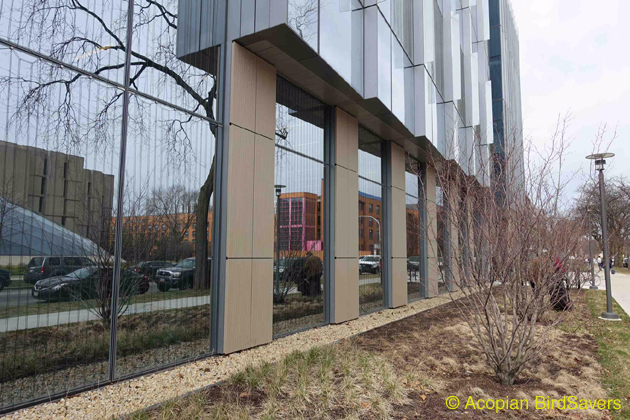 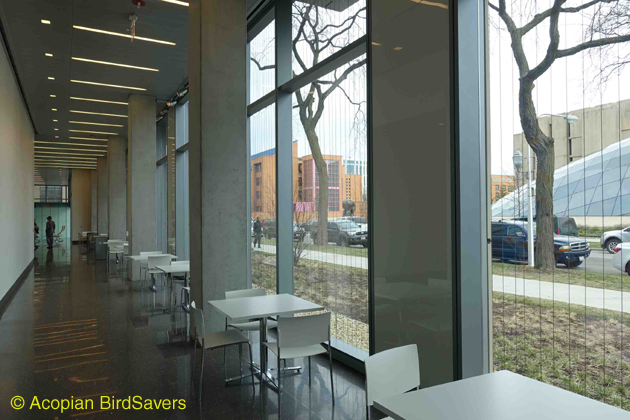 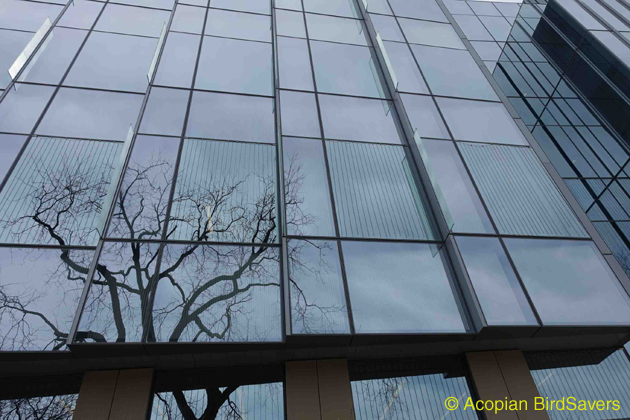 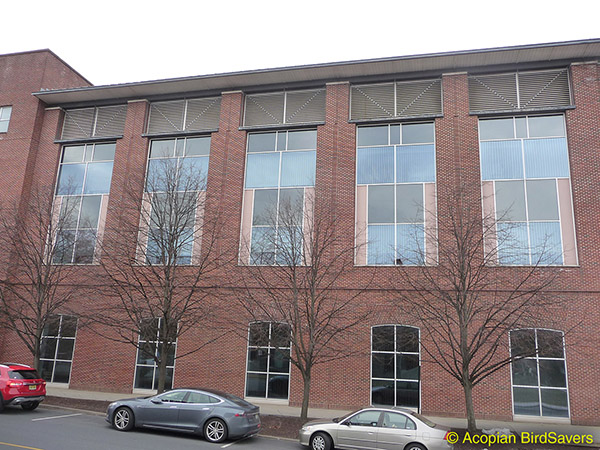 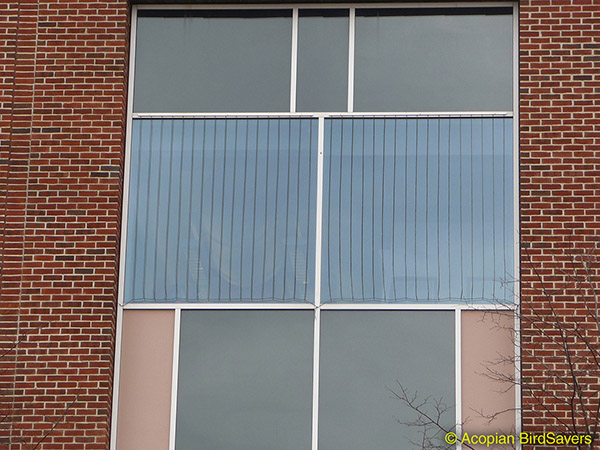 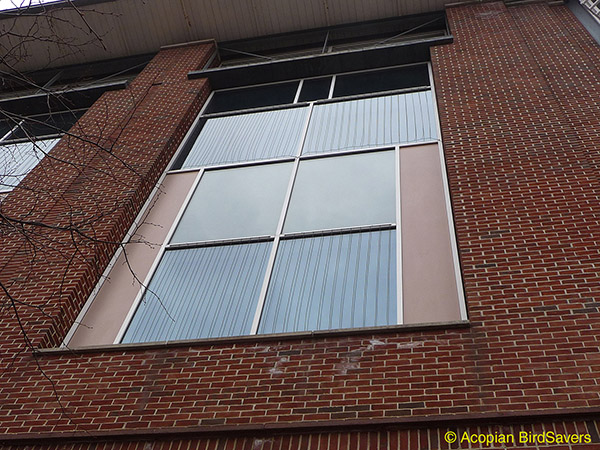 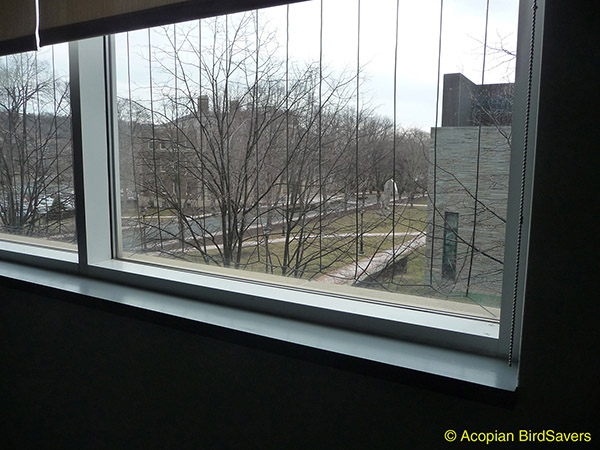 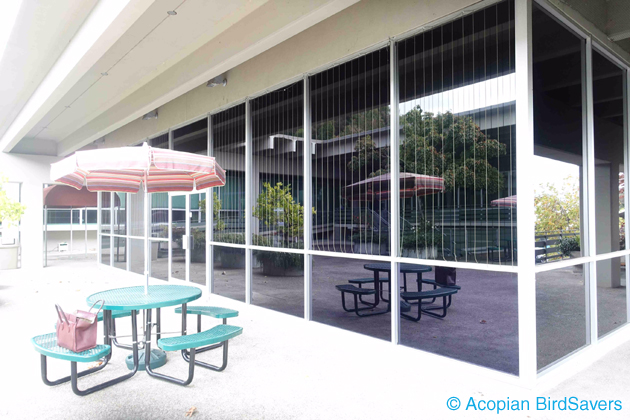 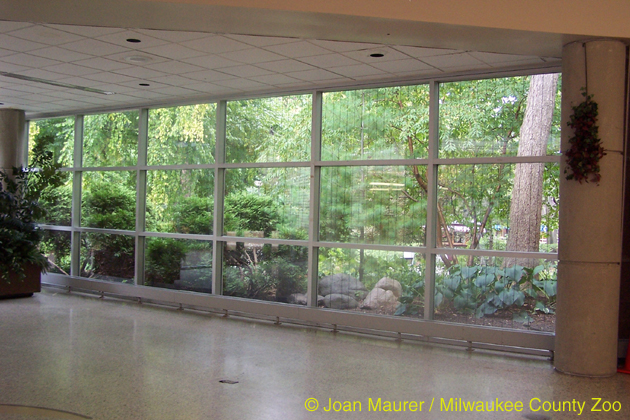 The Milwaukee County Zoo has Acopian BirdSavers at various glass areas throughout the Zoo.

“BirdSavers are absolutely fabulous…I love the product. Took our Maintenance guys 1 hour to install, and that was primarily because they had to work around vegetation. Most folks said they didn’t even notice it…which is good.”